I was in music class, singing some silly song or other with the rest of the fifth graders.  Somehow an announcement came.  I can’t remember whether it was over the intercom, or a messenger came from the office.  In my memory it is a messenger from the office with a note, but that memory doesn’t feel reliable.  The music teacher wept.  That part I know happened for sure.  Apartheid, South Africa’s system of racial segregation and minority white rule, was over.

I cried too.  I didn’t know what Apartheid was.  I wasn’t sure whether I was crying for a happy thing or a sad thing.  The teacher explained about Apartheid.  It was foreign to me, sitting in that music room with the children mostly of engineers and machinists from around the world.  We learned about Nelson Mandela.  I never did know what connection my music teacher had to South Africa or Apartheid or Nelson Mandela to make her weep.

I understand there are many views of Mr. Mandela and the methods he used to achieve the successes he had.  Many in my parent’s generation, for example, have a completely different view.  Regardless, he has been a hero during the time I have known of him.

Nelson Mandela died today at the age of 95.

Just a quick share.  I’m still in the depths of Nanowrimo and don’t expect to be surfacing at least until the end of the month, but this interview of Susan Cain, author of Quiet, by Marie TV (via Lifehacker).  Was interesting.  I like the idea of setting a quota for the number of social/networking events I have to participate in during a specific time period.  It helps me, though, to think of it as a budget.  There is a certain amount of networking that I have to do, but by setting this budget or quota, I don’t have to spend more of my personal energy and putting myself out there than I have budgeted for.

Reading my news feeds this morning while eating breakfast, I came across Gizmodo’s repost of the todayIfoundout.com article “Whales Don’t Spray Water Out of Their Blowholes Nor are Their Throats and Blowhole Connected.”  I have to admit that my first reaction was “you mean people don’t already know that?”  But in fairness, not everyone spent a third of their life on or near Puget Sound, or is married to someone who grew up living on an island. Something everyone should know or not, there were a number of bits of really cool whale trivia:

I can’t actually vouch for the truthfulness of any of the above, not being a whale biologist, but it is pretty interesting bits of trivia.

It has been expected, but congratulations to Janet Yellen, who was nominated today by President Obama to follow Ben Bernanke as Chair of the Federal Reserve System Board of Governors.  As the Fed Chair, she takes the position as what one of my economics professors (and several news stories) called the “Most Powerful [Wo]man on Earth.”  With congressional deadlock and the threat of default on the horizon causing fears about the safety of Treasury Bills, etc, I wonder how “most powerful” the job really looks these days.
News sources have been pouring out profiles and lists of facts about Yellen all day (e.g. here, here, and here).  Tyler Cowen at Marginal Revolution, who I follow in RSS and read regularly, has written some about Yellen.

This is not part of my Nerd’s Burden series (see part 1 from earlier this evening), but I thought this English class parody of Rudyard Kipling’s White Man’s Burden (which you can read here) by McClellen of Not So Realistic Fake Apple is pretty good.  Read one of the verses:

Take up the Nerd’s burden.
The savage wars of stars.
Don’t let others be fooled
The original trilogy is best.
When your goal is near
Someone won’t have seen it.
And punish heathen blasphemy
About the special effects.

Now go and read the rest of the poem.  While you are there, read McClellen’s self-introduction – I don’t know much about her, but her introduction paragraph is hilarious.

I have referenced a lot of information about being a nerd.  If you have been following along, by now you know that nerdiness is ever so much more than pocket protectors and taped glasses.  The randsinrepose Nerd Handbook talks about “the amazing nerd appetite for knowledge.”  While this can result in amazing stores of useful information, skills, abilities, and trivia, it is also an incredible burden.  I am drawn to new knowledge like Mothra to Burning Man.  I deal with this all the time.  Today I had an experience that is typical of the nerd relationship to information.

END_OF_DOCUMENT_TOKEN_TO_BE_REPLACED

I just came across Wired Magazine’s Geekster Handbook (Subtitled  a Field Guide to the Nerd Underground) from 2008.  The post is more of a list than a handbook, the descriptions are offensively myopic stereotypes, and the whole thing describes caricatures of various geek subgroups, in spite of the use of the label nerd in the subtitle.  In spite of all that, the descriptions are pretty funny, and the illustration is entertaining.  I especially love the look the hacker is giving to the otaku girl.  I can’t tell whether it is a leer or a sneer.  An example from the list:

5. The Hacker
Disposition: Chronically crabby — then again, having such a superior intellect is a heavy burden. Paranoid tendencies.
Beliefs: One shall stand, one shall fall. Sun allergy is a real condition. Cybersex: not utterly disgusting. Cory Doctorow is too soft on DRM. 2600 magazine has gotten too commercial.
Turn-Ons: Trinity. l33t fluency. Narc-spotting at DefCon.

I’m not entirely sure whether this should be offensive or funny.  We live in an age where even a geek or nerd is supposed to be able to live free from ridicule.  So what if the otaku loves Japanese comics?  Some women obsessively love shoes.  Which passion is more stupid?  So what if the hacker loves computers?  Some men are so passionate about sports that they aren’t able to talk about, watch, or think about anything else (YouTube).  Which passion is more stupid?  If shoe lovers and sports fanatics deserve a life free from ridicule and scorn, don’t hackers, otaku, gadget geeks, fanboys, music geeks, and gamers?  Just to be up front, I thought that the post was humorous in spite of what it means.  But being funny doesn’t make it right.  [I didn’t actually intend this to be a rant.  Oh well – rant served.]

Trying to add some order to the massive pile of junk that is my bookmarks bar, I ended back on randsinrepose.com this afternoon.  I have written before (also here and here) how much I love that site.  Thanks to the Rands (in case you wondered, the author’s name isn’t Rand) blog, my wife understands me as a nerd and is somewhat slightly more forgiving; I have been able to get advice from friends without the fear of being screwed over; I have been able to better interact with the rest of the management team, better manage the people who work for me (and others), help my supervisor better manage me; and I now have a framework for thinking about my own motivations and actions.  Back on randsinrepose, lost in new posts that I hadn’t yet seen, I realized that I have have never written about Nerd Attention Deficiency Disorder (N.A.D.D.). The author explains the term:

“My mother first diagnosed me with NADD. It was the late 80s and she was bringing me dinner in my bedroom (nerd). I was merrily typing away to friends in some primitive chat room on my IBM XT (super nerd), listening to some music (probably Flock of Seagulls — nerd++), and watching Back to the Future with the sound off (neeeeerrrrrrrd). She commented, “How can you focus on anything with all this stuff going on?” I responded, “Mom, I can’t focus without all this noise.””

END_OF_DOCUMENT_TOKEN_TO_BE_REPLACED

Yesterday I posted about Quiet, the new Audible book that I am listening to, and talked about how much I have enjoyed the book so far.  Today I found a TED talk by Susan Cain. 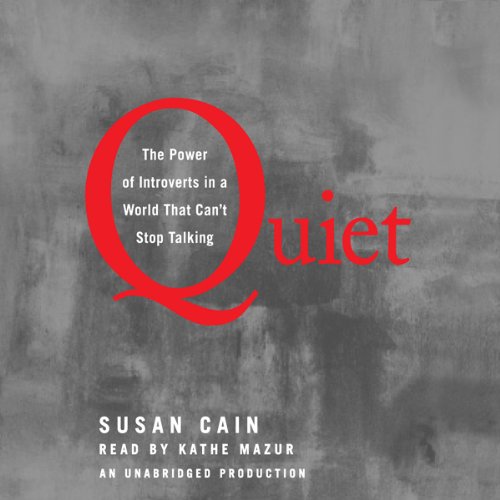 I have the hardest time spending my monthly Audible credit.  There are just so many different books, and it takes me forever to get through a single audio book.  I am still working on the Eye of the World that I started two months ago, and haven’t even started in on last month’s purchase.  This month, after several hours of search and reading reviews and going back and forth, I finally decided on Susan Cain’s Quiet: The Power of Introverts in a World That Can’t Stop Talking.  I first heard Cain on an interview on NPR’s All Things Considered.  I have listened to a little more than the first chapter or so of the book, but I have to say already that it is really great.